Over the past few weeks, I have been reading Big Debt Crises by Ray Dalio. The case study on the Great Depression ties nicely into two projects I’m working on (1) My paper, “What Triggers National Stock Market Jumps?” with Scott Baker, Nick Bloom and Steve Davis, which uses newspaper accounts to identify the causes of large moves in the stock market and (2) my paper on Trade Policy Uncertainty with Marcelo Bianconi and Federico Esposito.

In Dalio’s book, he claims, “Stocks sold off sharply as it became clear the tariff bill [Smoot-Hawley Tariff Act] would pass. After falling 5 percent the previous week, the Dow dropped another 7.9 percent on June 16, the day before the tariff bill passed”. I noticed that in our Wall Street Journal (WSJ) dataset (available at https://stockmarketjumps.com/), we did not attribute this market drop to trade policy. I wanted to understand why the WSJ didn’t make the connection between the tariffs and the stock market, so I decided to gather more newspaper articles.

For the most part, I am going to take a step back, and let the journalists of 90 years ago speak for themselves. Their commentary is not contaminated by years of hindsight, as Dalio’s book might be (although each case study in the book does have a ‘real time’ news feed, so the reader can see what journalists were thinking as the crises he studies evolved). Every article in this post is from the ProQuest Historical Newspaper database. All the articles are from 6/17/1930 – the first day after the tariff was passed in the Senate – and are analyzing what happened on 6/16/1930. They are not in an easily machine-readable format, so I have included pictures of the articles in this post.

According to Dalio: “Protectionist sentiment resulted most notably in the passage of the Smoot-Hawley Tariff Act (Also known as The Tariff Act of 1930), which imposed tariffs on nearly 20,000 US imports. Investors and economists alike feared that the proposed 20 percent increase in tariffs would trigger a global trade war and cripple an already weak global economy.”

This figure (also from Dalio’s book) plots the average tariff rate on imports which would be subject to these taxes:

After Smoot-Hawley, average tariffs increased from around 20% to over 50%.

Not all sectors, however, were equally affected by these tariff changes. The plot below shows the distribution of new tariff rates, where each observation represents a different SIC 4 industry: 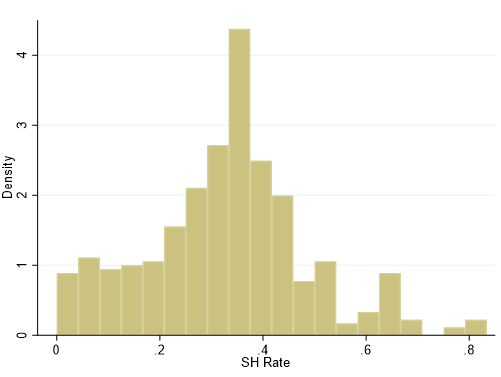 Some industries were essentially unaffected, while others had tariffs going to 80%. This heterogeneity is going to be important later in the post when we examine the effect of the tariffs on the stock market.

On 6/16/1930, the CRSP value-weighted index, which is what we use in the Stock Market Jumps paper to identify large moves in the stock market, was down 5.4%.

We coded this day as commodities based on the following WSJ articles.

The first article mentions the tariffs, but said the main factor was the drop in commodity prices. 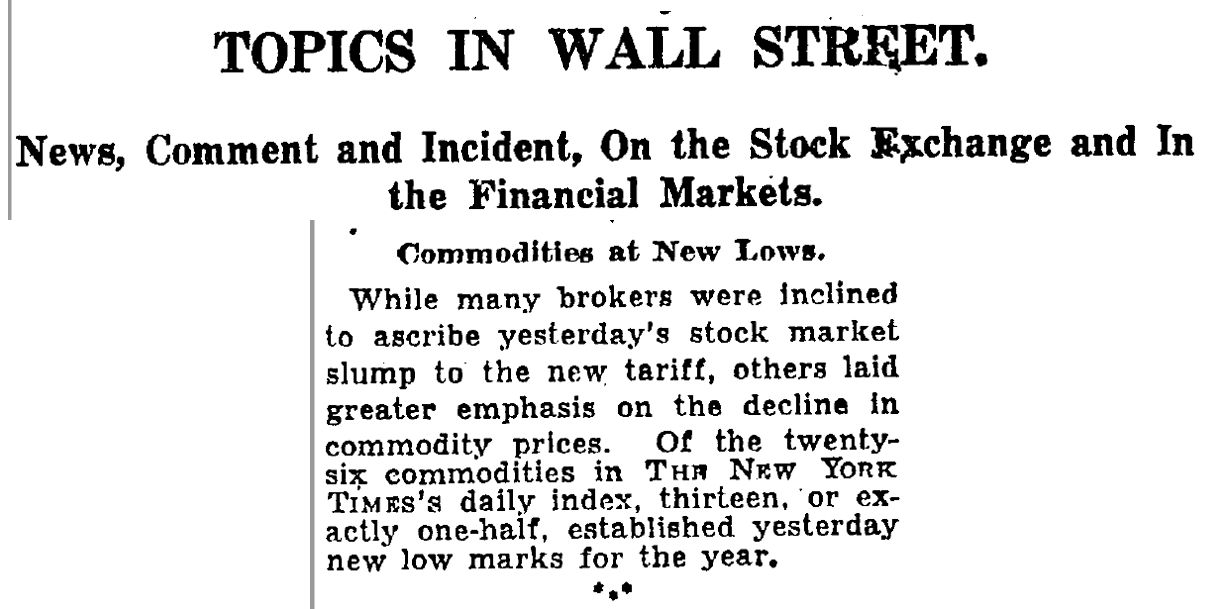 I believe the drop in commodities was related to the tariffs, but that will come out in other newspaper articles.

The second article makes no mention of the tariff, and only attributed the move to commodities prices: 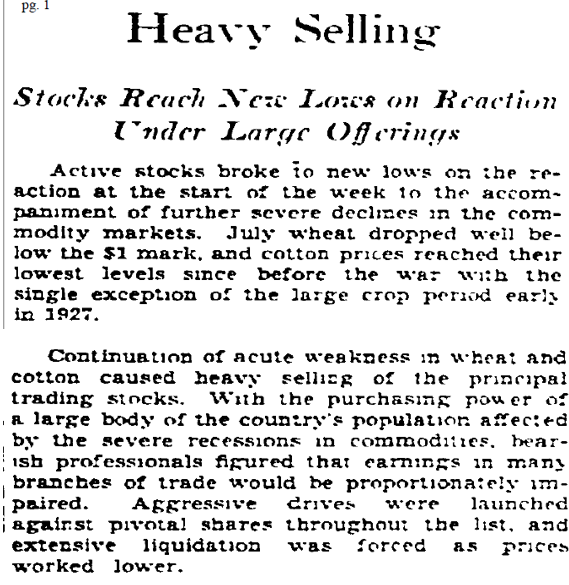 In fact, some WSJ articles argue that the tariffs would help the U.S. economy: 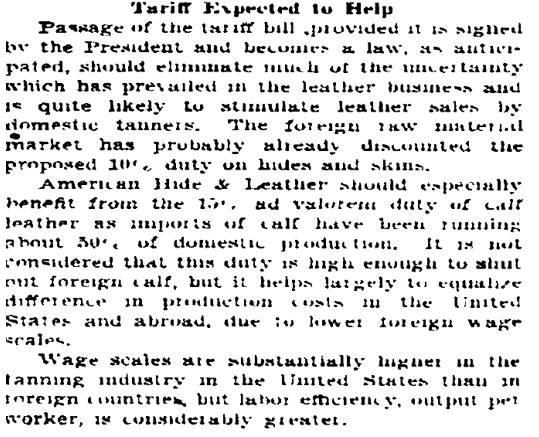 This wasn’t the only article touting the benefits of the tariff, even though the market was down over 5%!

Journalists at the time thought that the passage of the bill resolved uncertainty: 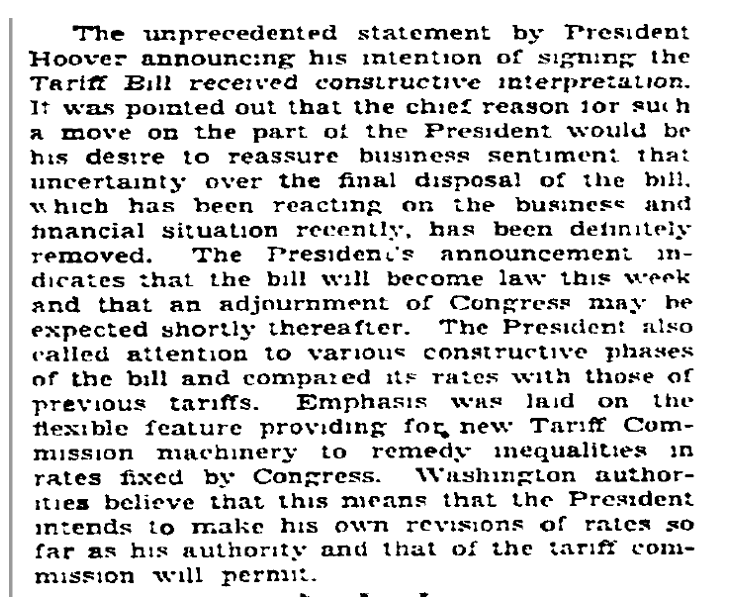 And they thought it would stimulate trade. 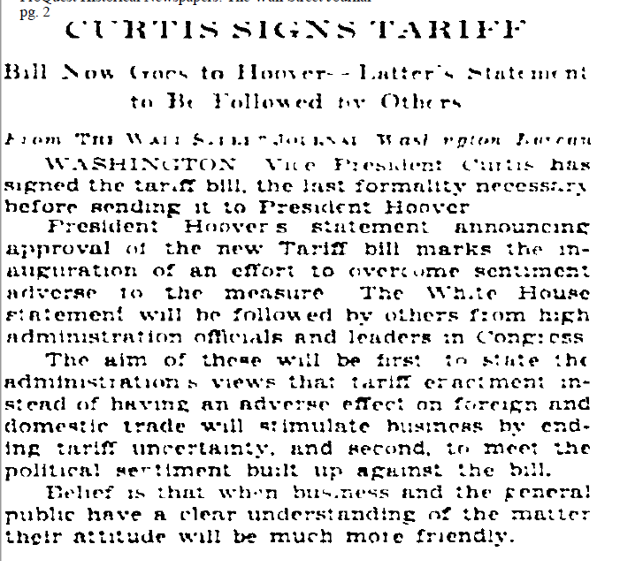 With hindsight, we know otherwise. According to Dalio: “As similar policies piled up in the years that followed, they accelerated the collapse in global trade caused by the economic contraction.” During the Great Depression, US imports and exports dropped by 67% (Eckes, 1995).

Not every article in the WSJ believed the tariffs were good news. This article has some strong words to describe the tariff plan. At the time, Hoover thought the tariffs were not perfect, but he would have the power to amend them as needed:

Here is another passage from the same article, where they discuss the President’s plans to change the tariffs if the need arose: 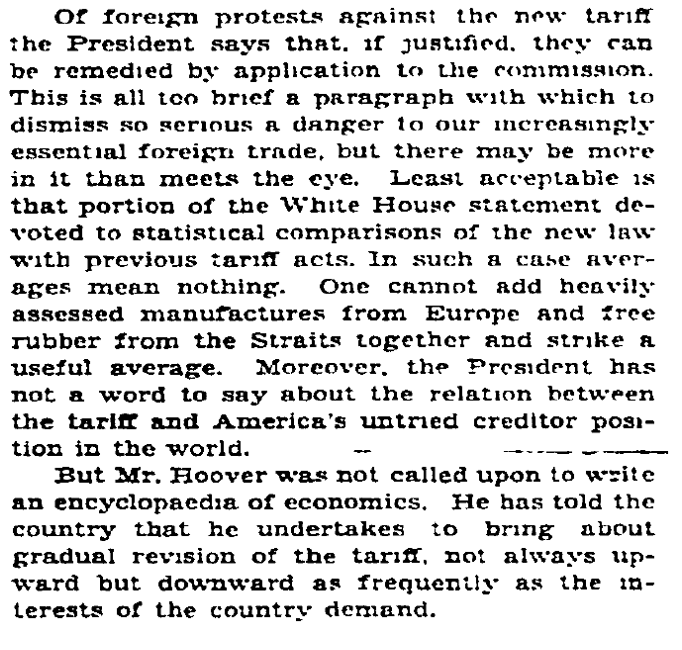 A concern at the time was that our trading partners would levy retaliatory tariffs: 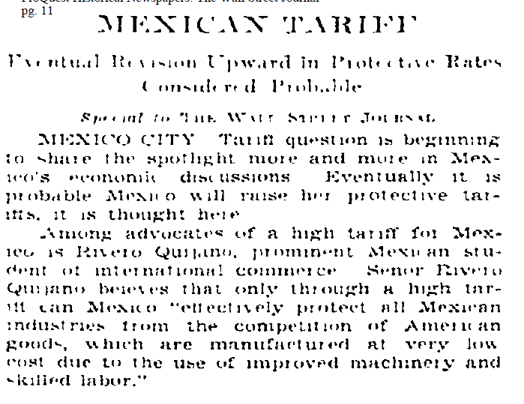 This was not restricted to Mexico. According to Dalio, “The most impactful initial response came from the US’s largest trading partner, Canada, which at the time took in 20 percent of American exports. Canadian policy makers increased tariffs on 16 US goods while simultaneously lowering tariffs on imports from the British Empire.”

Interestingly, the journalist thought the tariffs would have no effect on the price of copper: 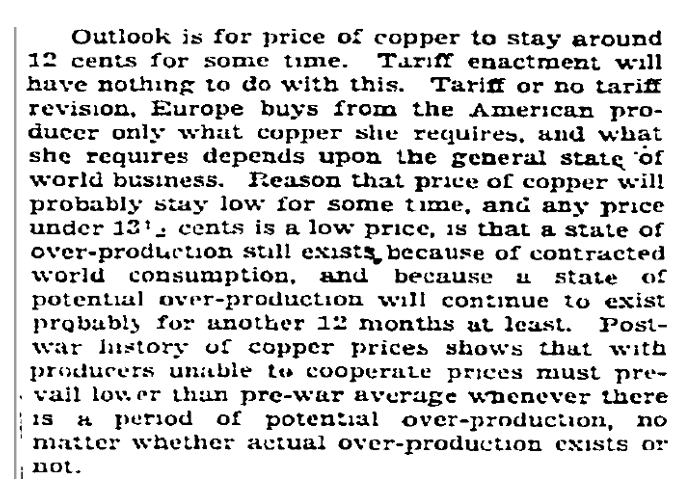 The articles in Dalio’s time line come from the New York Times (NYT), so I decided to look there for additional evidence.

This article blames the tariff bill for the drop in the stock market. 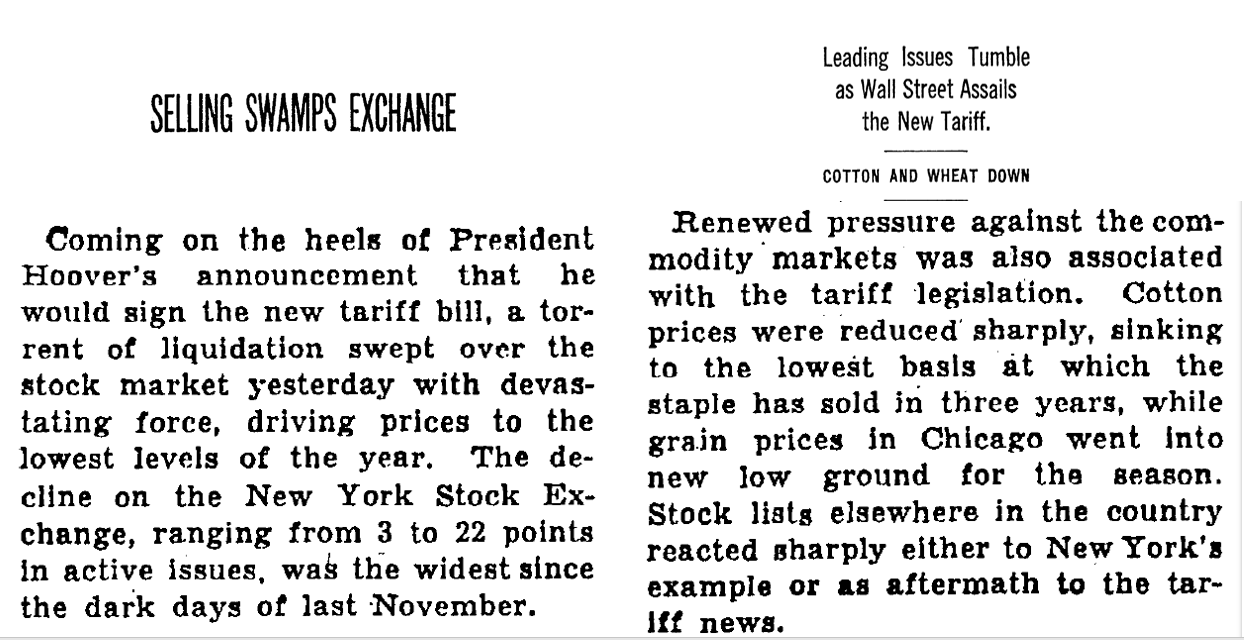 Although not every article in the NYT agrees that tariffs were responsible for the drop in the stock market: 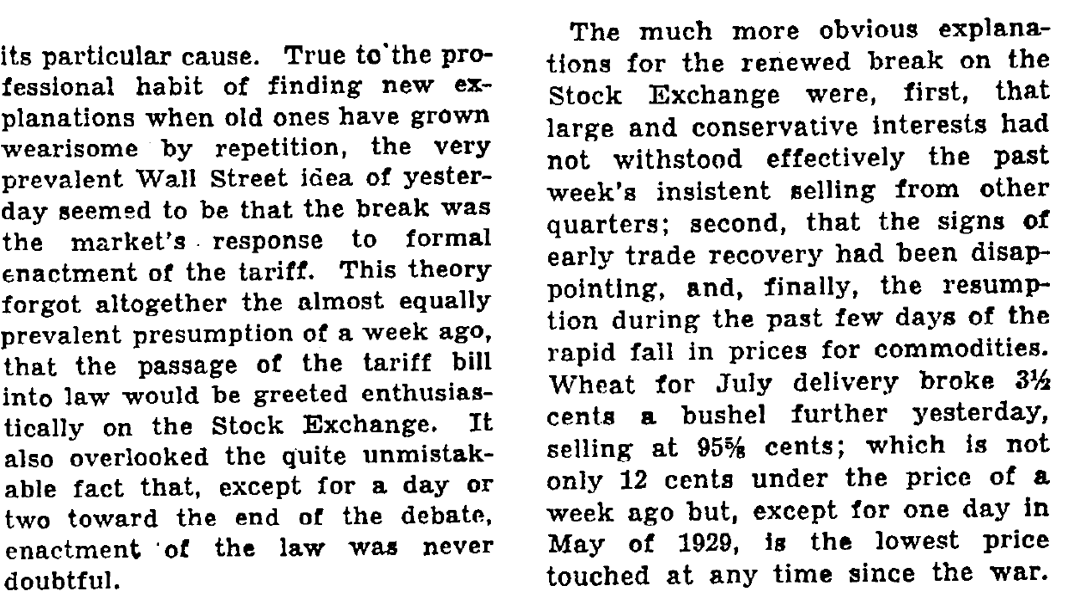 Smoot (one of the eponymous authors of the tariff bill) was very positive on the tariffs: 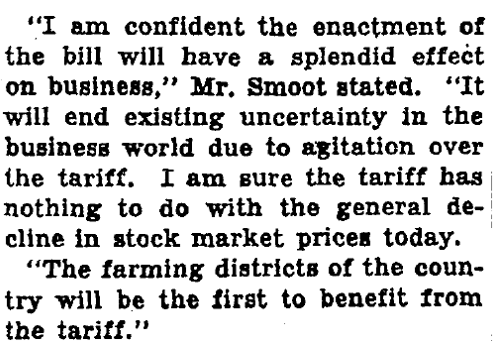 Although he might have been missing a few facts… In this passage, he is claiming the stock market was up in response to the tariffs, even though it was down: 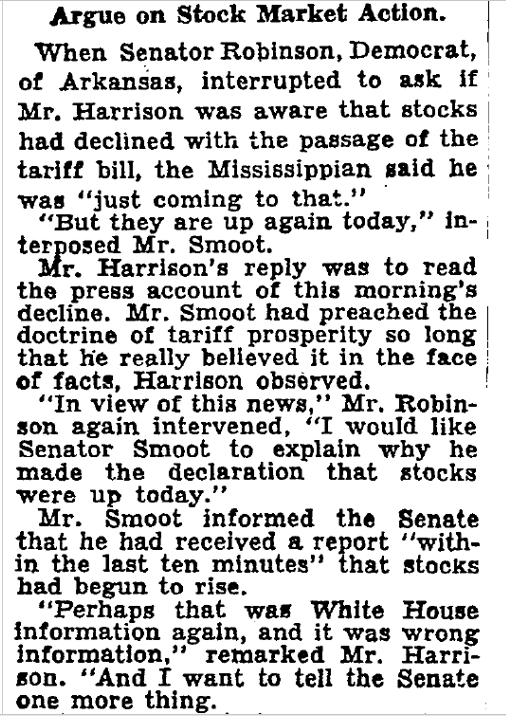 Finally, the main NYT article [Selling Swamps Exchange, shown above] links the drop in commodity prices to the tariffs [Right Panel]. Note that cotton was one of the harder hit commodities on 6/16/1930. The left two panels are from the NYT, while the right panel is from “Abreast of the Market”, a long running market commentary column in the WSJ: 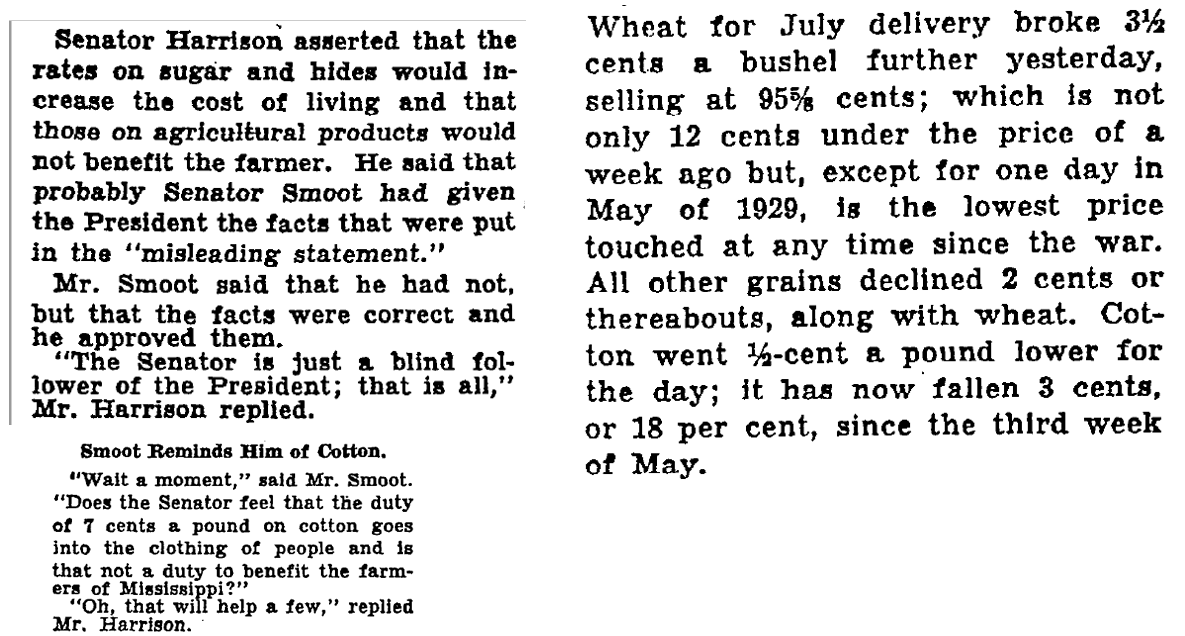 What did other newspapers have to say? The Washington Post attributes sinking stocks to the tariffs:

As does the Chicago Tribune: 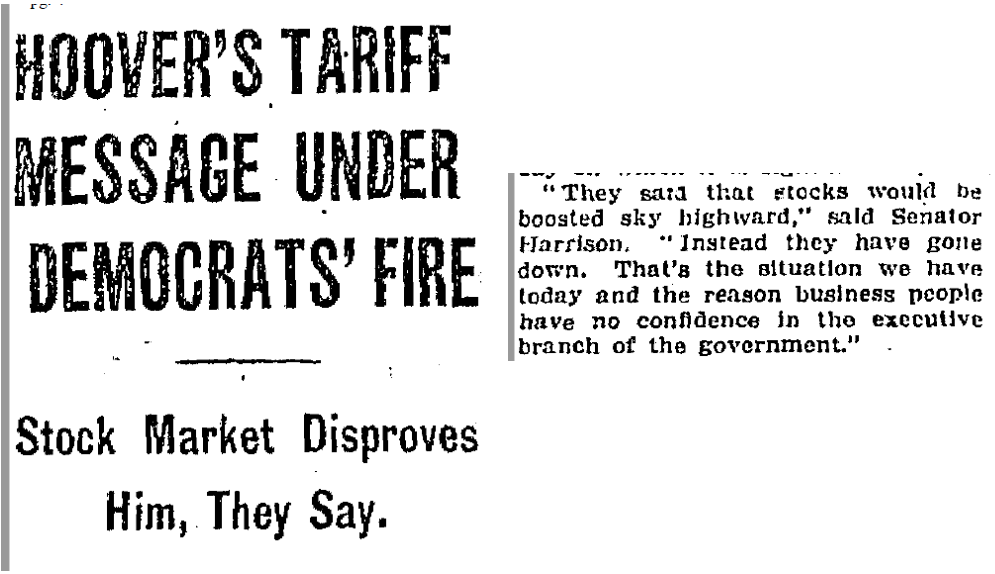 The Los Angeles Times, however, attributes it to a “deflation in the speculative markets”: 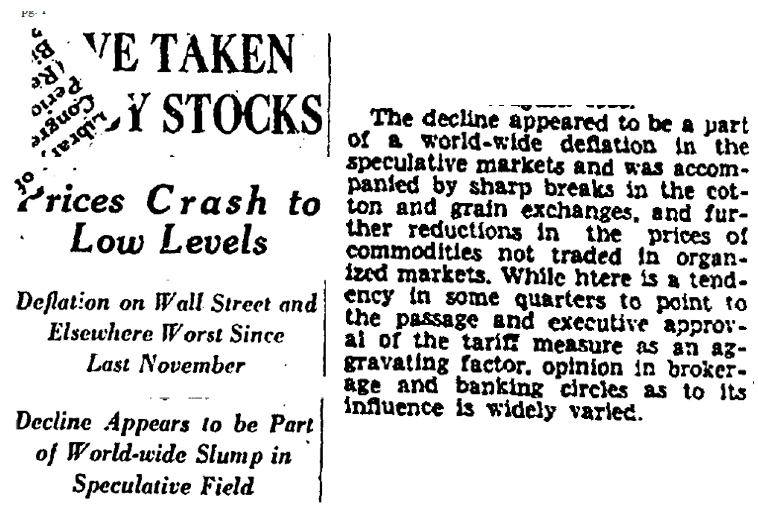 The last paragraph says the tariff measure was an ‘aggravating factor’, but does not make a strong link to the stock market’s performance that day.

How does all this link to my paper on Trade Policy Uncertainty? In the early 1990’s, congress threatened to raise tariffs on Chinese imports to Smoot-Hawley levels. These fights in congress lead to a lot of uncertainty about China’s future as a major trading partner with the United States (see e.g. Pierce and Schott 2016). In our paper, we find that the introduction of trade policy uncertainty can push down stock prices. Here, the firms exposed to more policy uncertainty (dashed red line) drop more in response to the start of the fight over Chinese tariffs (7/18/1990-7/23/1990) than stocks less exposed to this uncertainty (solid blue line): 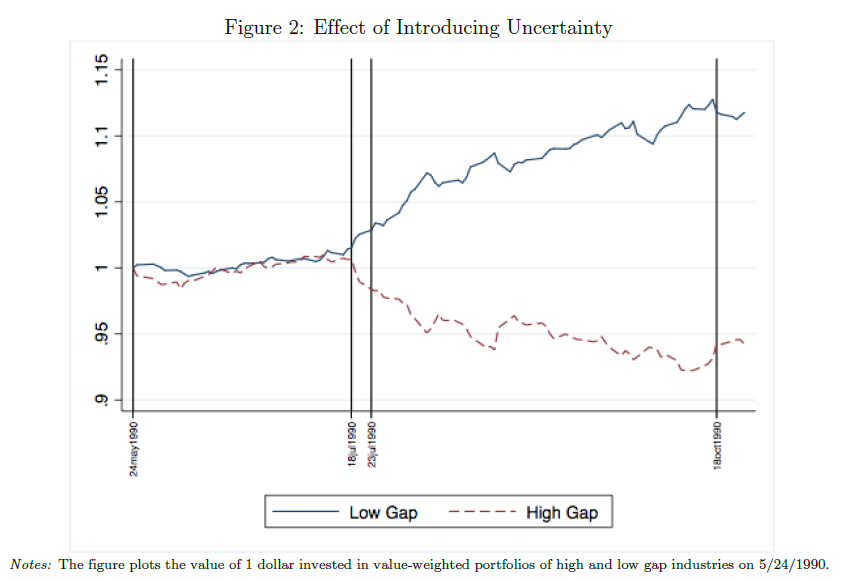 A natural question is: Was there really uncertainty about the Smoot-Hawley tariff bill being signed into law? Did the President’s statement reduce uncertainty? According to the NYT, no way: 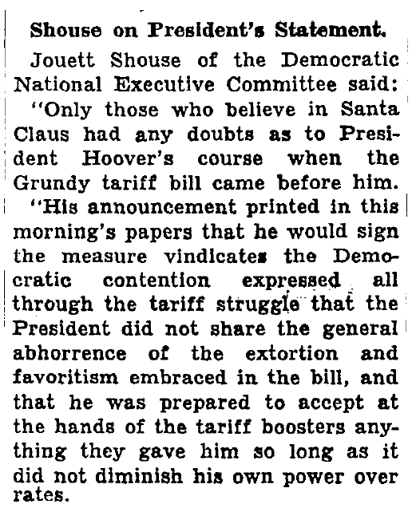 Although the White House denied that passing the bill was certain: 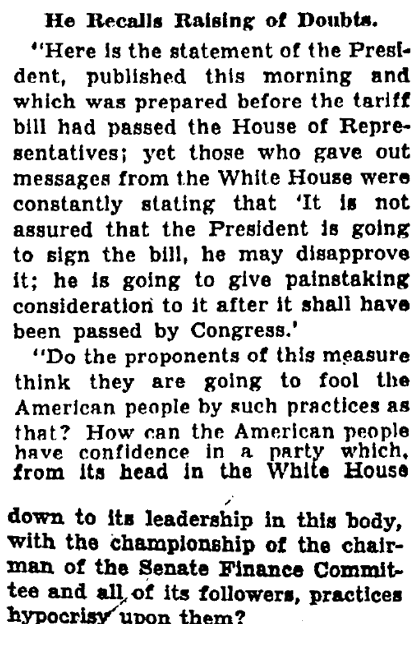 When we present the stock market jumps paper, a lot of audience members ask, “why not just code what ‘actually’ happened?”. I think these newspaper articles show that people at the time may not have been sure. And the only thing we can do, without the hindsight of knowing how bad the tariffs ended up being for the global economy, is to code what the journalists said at the time.

I think the strongest link between the tariffs and the stock market drop, however, is the timing. The bill was sent over to the president soon after noon, which was exactly when the market started to drop. 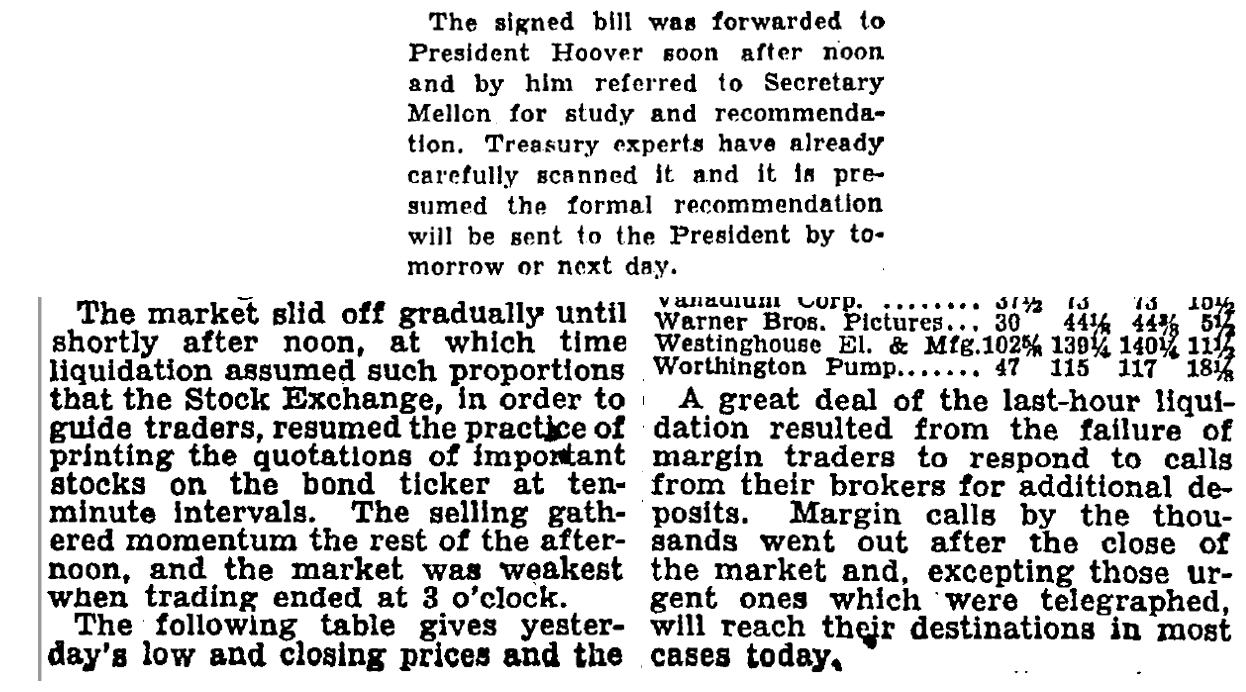 So what happed to stock returns? There was a large drop in stock prices (maroon line) on 6/16/1930 (vertical red line), and a huge increase in trading volume (blue line): 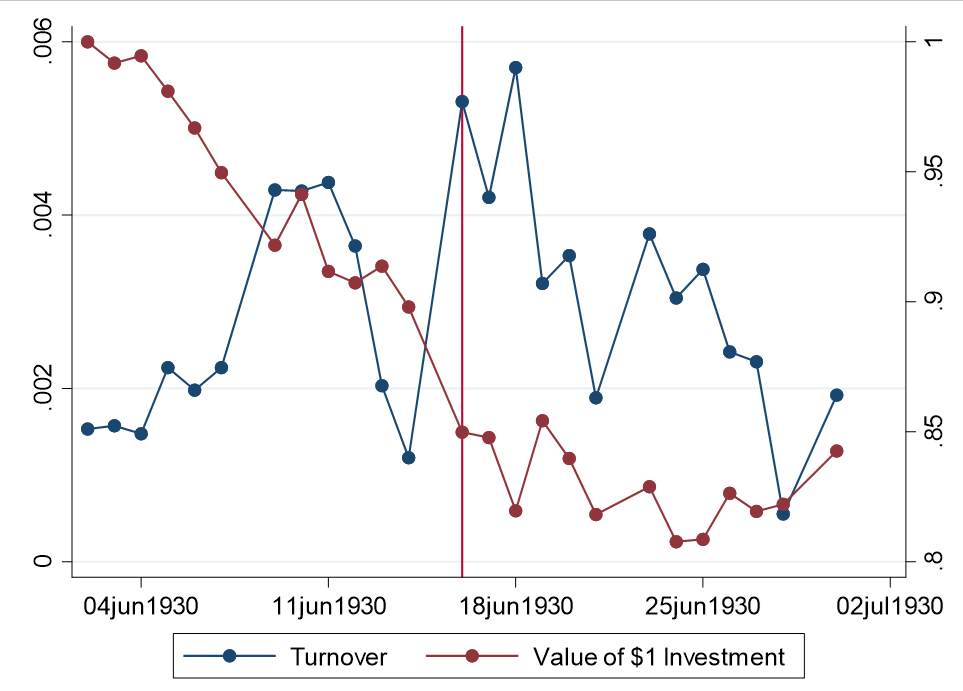 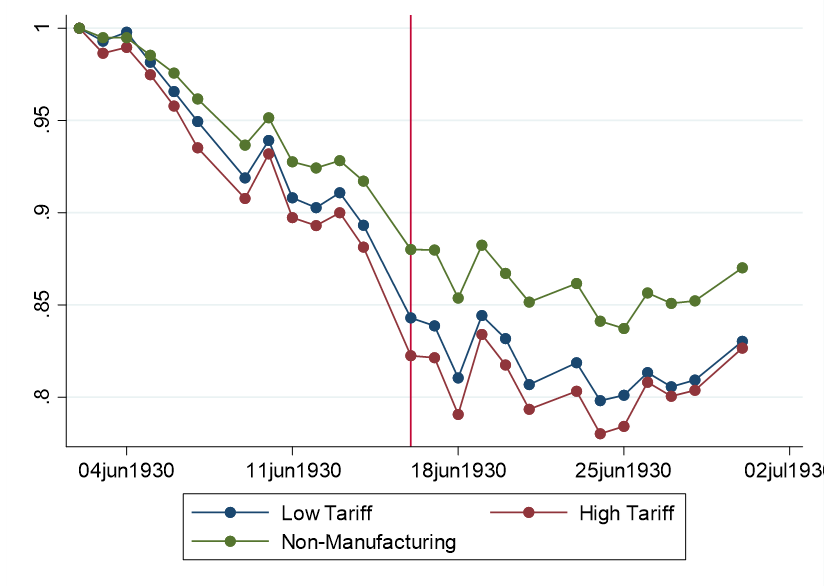 For me, two pieces of evidence point strongly to the link between the tariffs and the drop in the stock market. (1) The fact that they happened at the same time of day and (2) the fact that the stocks of companies more exposed to tariff increases were hit harder on that day.